Founded in 1999 this string quartet has built a reputation in interpreting all kinds of modern Music in well-defined projects. Earlier releases concentrated respectively on Steve Reich, James Tenney, etc. This year two new releases saw the light. Sens(e) Absence has two lengthy and otherwise related works by Ernststalbrecht Stiebler (Sehr langsam) and Daniel Rothman (Sense Absence). Sehr langsam from veteran German composer Stiebler, describes perfectly how this piece progresses. It moves very slowly forward, through a constant fading in and fading out of the strings, who play long extended notes. The piece breaths a deep sonority and ask for an exercise in patience, in just listening without expecting much to happen. Rothman is an american composer of a younger age, who composed a piece that is closely related to Sehr langsam. Also his composition is about drones and moves on very slowly, again through the playing of long extended notes. In both pieces little intervals, harmonies and other details are discovered when listening attentively. On Le mensonge et l’identité the Bozzini Quartet shows a different face. It is a work by Joane Hétu and Jean Derome for string quartet, “whom members speak, move about, improvise, and accompany themselves with a prerecorded tape.” The work is divided in three sections. In the first part we see the classical quartet. In the second part the musicians start to move on stage from their original positions. In the third section the musicians operate individually. Over the pieces the music moves from composed to improvised, from constructed to deconstructed. But whatever happens, throughout the musicians play together, cooperating in one work. The music is also meant as a metaphor for what happens in our society. Institutions disappear, leaving the individual alone and homeless. However music is a force that create community as well spiritually as physically. That is the philosophy of this piece, and that can be picked up from the spoken parts. Sometimes the music is interrupted by spoken words, and other places they move along unisono. Personally I’m not a fan of music where spoken words are part of the concept, to communicate some message. But that is a matter of taste. Not an easy work this suite. Life isn’t an easy matter either. 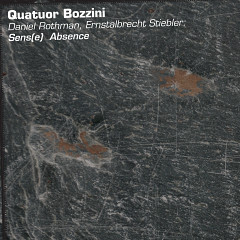