Among many things the function of a bridge is to connect otherwise separate parts, creating a larger, more inclusive whole. The form of a bridge, its structure and design, is beautifully essential. This Bridge is no exception: whether the music is written or improvised what is important to consider is the renaissance of the musician who, as in the past, is both an interpretive and a creative artist, a performer who makes music by way of integrating, “bridging” both worlds to form a larger more unified one. Here Freedman makes the necessary connection between the composer and the listener by her delivery as interpreter, improvisor and as composer herself.

This item can be downloaded and/or listened to at actuellecd.com.

One: I love this music.

Two: To document a moment in my career when my playing music is equally about composition, interpretation and the spontaneous combination of the two, in improvisation. For my own artistic health each practise is exactly necessary for the others. Thus Bridge: the connecting structure, the all-inclusive form.

Four: A public offering of an exceptional and extraordinary programme of solo clarinet music. The most recent composition, my début performance and the only track with two players, is Michel Galante’s Flicker, a duo for clarinet in perpetual motion and a minimal though reassuring bell-tolling piano. Flicker’s mechanical flurry is pure texture: a piece concerning the tangible surface. The most sharply contrasting piece is coincidently the oldest, Giacinto Scelsi’s Maknongan. This otherworldliness addresses sensations below the surface by undulating waves of slow-motion Morse code. Apart from the gorgeous redrich sound of the contrabass clarinet this score demands creative attention towards what is not written. Turning upwards in tessitura, speed and volume is the second oldest piece on the programme, Franco Donatoni’s Clair. This “jazzy halleluiah” contrasts the inquisitive, more introspective nature of the other scores: in the style of an epic military tattoo, Clair is a pure exclamation of joy. Monique Jean has given me music as a passageway: a tunnel, a covered bridge. The only electroacoustic composition here low memory #3 is by nature multiphonic, aurally multi-dimensional and psychically multi-temporal: filling the ear with the weight of a vivid but distant past, powerfully propelling into the present, and groping into inevitable light. The two French works are again contrasting, both to the other compositions and to each other. Whereas the two Italians provide extremes in musical feel, Pascal Dusapin’s Itou and Georges Aperghis’ Simulacre IV differ radically from each other by the treatment of their materials. Where Itou uses a vast vocabulary to depict a singular character, Simulacre contains relatively few motifs that, re-iterated with nuance, produce a multitude of meanings. If Itou is an angular portrait of a “wyrd” being, peculiar and unpredictable enough to eliminate any programmatic inference, Simulacre is a simple homonymic song, neither rambling nor stumbling in discourse, but rife with specific babblings. My own composition, Brief Candles, stands alone on this album as the only score that includes both written and improvised sections. It requires the performer to be both virtuous and disobedient, always straddling a balance between knowing and discovering, this dichotomy rampantly abused by obscuring the sense of beginning, middle and end.

Five: Bridge One: Firth of Forth, Bridge Two: de Normandie and Bridge Three: 59th Street were entirely improvised moments during the studio sessions, music that was certainly influenced by the written works swarming at the tip of my breath. As with my practise during live performances, I wanted to record that which would surface spontaneously while under the influence of such an exigent programme, relating entities and organizing sounds in time. The result is there, here for you, in my Bridge. 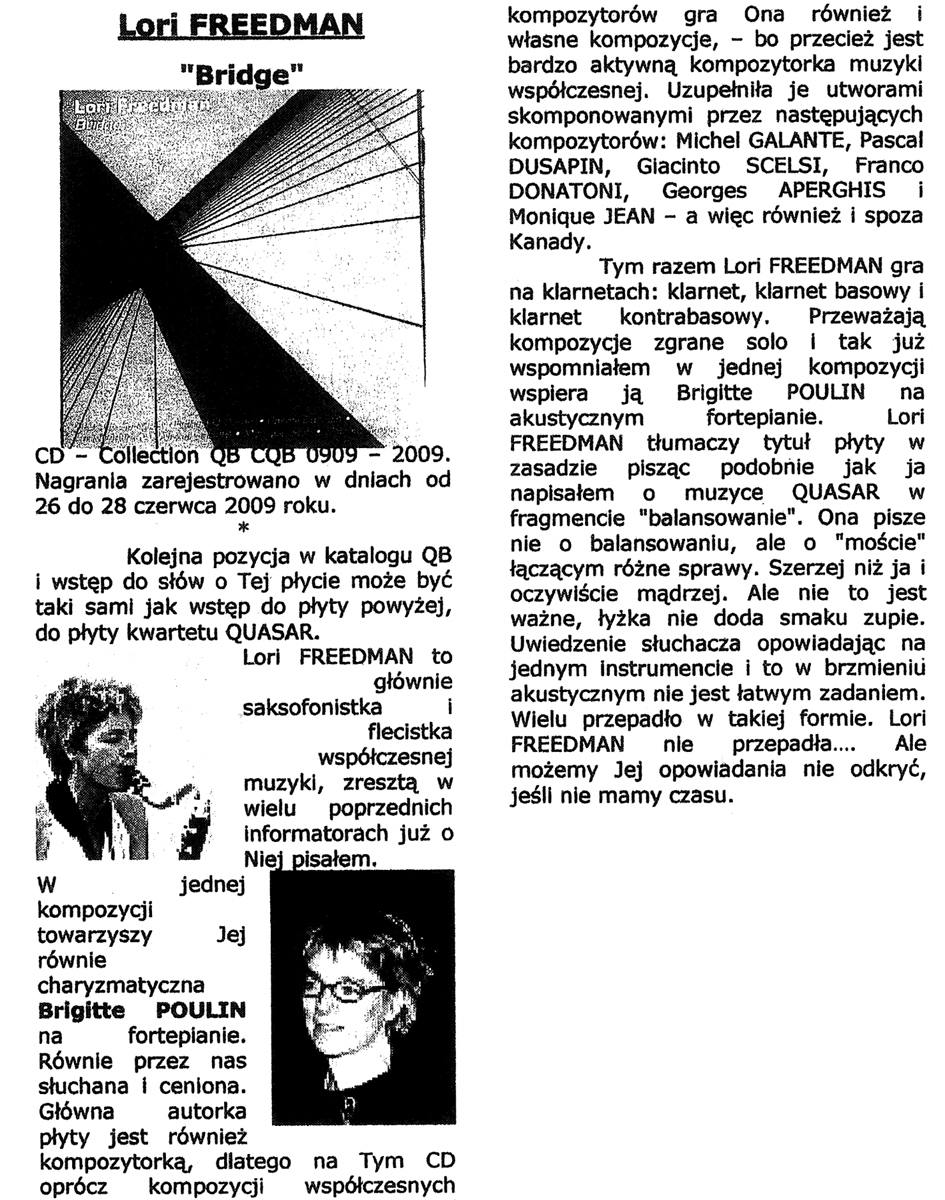 Lori Freedman returns with a beautifully recorded solo album called Bridge. All nuances and colors of her playing can be noticed and fully enjoyed on this crystal clear recording. Freedman leads us through ten works that have her playing bass clarinet, accompanied by Brigitte Poulin (piano) on Flicker (Michel Galante). Some of them are improvisations. Others are compositions by well-known (Scelsi) and not so well-known composers like Monique Jean, Pascal Dusapin, Franco Donatoni, etc. Improvising and playing composed music are equally important for Freedman at this stage of her career and that’s why we find examples of both of them on this record. The contrasts I experienced do not exist between the improvised pieces on the one hand, and the composed ones on the other. Freedman choose very different works to interpret, offering a diverse richness and many contrasts. For instance, Clair (1980) by Donatelli plays intelligently with jazz idiom and is a pleasantly light and positive work. Scelsi’s Maknongen (1976) remains in dark and low sections that are interrupted by almost screaming outbursts. Improvisation and composition are combined in Brief Candles a work composed by Freedman. The closing piece Low Memory 3 by Monique Jean is the only electroacoustic work. The clarinet is surrounded here with sounds that range from ambient-like to very noisy eruptions.

A strong record, demanding but captivating. Montréal bass clarinetist Lori Freedman offers here a CD of contemporary music. And through this set of works composed for bass clarinet (by Michel Galante, Pascal Dusapin, Giacinto Scelsi, Franco Donatoni, Georges Aperghis, Monique Jean, and herself), she slips in three improvisations where she develops ideas (as fleeting as they may be) sourced within those works. It ties the album together while making the bounderies between composition/improvisation and composer/performer hazier. The Jean piece (the only mixed electroacoustic piece) is worth a special mention, along with the Scelsi (for the bright performance).

A strong record, demanding but captivating.